“Behind the Smoke”, a campaign to raise awareness about the risks of cannabis.

School dropout, work or domestic accidents, insecurity,… The Government launches a major awareness campaign to warn about the consequences of the most commonly used drug in France.

With 900,000 daily users, cannabis is the most widely used drug in France. According to the French Public Health Barometer, nearly half of adults aged 18 to 64 (45%) have already used it, while 39% of 17-year-olds have experienced it, including 7% of regular smokers.

In recent years, smoked cannabis has been much higher in THC (1) than in previous generations. According to figures from the National Technical and Scientific Police Service (TSP), the level of THC in cannabis resin – the molecule responsible for the psychotropic effects of this drug – has tripled in the past 20 years, increasing the potential for dependence and causing hospitalizations.

The risks associated with the use of this drug, whether health, educational or social, are still too little known and/or underestimated. This is why the Government is launching a massive communication campaign to raise awareness about the consequences of cannabis use and trafficking.

This measure was announced by the Prime Minister in May 2021, at the end of the Interministerial Committee against Narcotics.

“The fight against drug trafficking is a priority for government action. Drug trafficking is indeed a scourge that destroys part of our youth, constitutes a devastating underground economy and paralyzes entire neighborhoods of the Republic.”        Jean Castex, Prime Minister

In order to raise the awareness of the general public and the youngest, the device is available in a TV spot, cinema and online; a campaign in the local and national media, and a poster campaign throughout the territory. The operation targets three main areas:

1. Consequences of cannabis use for adolescents and their education

Young people who regularly use cannabis often have lower educational outcomes. According to an INSERM (2) study, early cannabis users (under the age of 17) have a higher probability of not exceeding the baccalaureate. Cannabis use can also precipitate the onset of psychiatric disorders (anxiety, depression, psychotic syndromes). 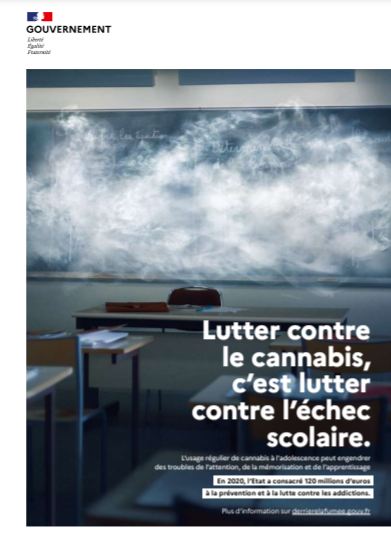 2.The risk of domestic accidents, a phenomenon that has been expanding for 10 years

Pediatric poisoning is the ingestion of pieces of cannabis resin, left by neglect around children.

A study by the National Network of Addictovigilance of the ANSM (3) reports a constant increase, since 2014, in the number of these intoxications by accidental ingestion, mainly in children under 2 years, occurring most often in the family setting.

The ANSM alerts health professionals and the general public about the severity of these intoxications, often underestimated, which lead very frequently to hospitalization. 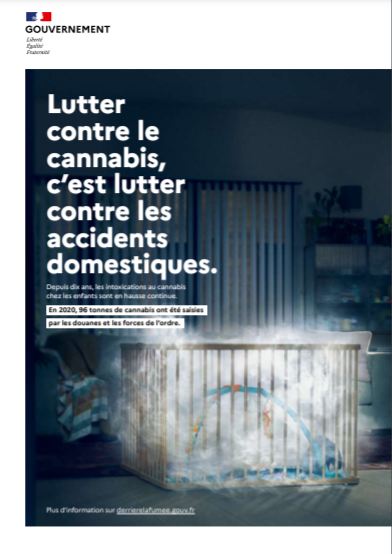 In 2020, 60 people were killed and 250 injured in drug trafficking settlements in France, half of whom are under the age of 25. 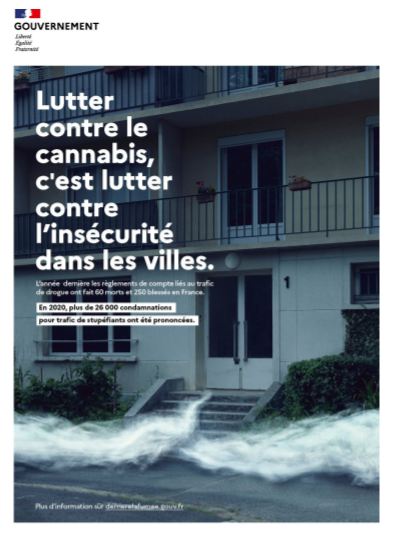 Present in almost all French departments and spread over 540 locations, these consultations offer a free and confidential welcome. They take place within the Specialized Centers for Support and Prevention in Addictology (CSAPA) or in places specialized in the reception of young people (Adolescents’ Houses and Youth Listening Points).

In 2020, the State invested €120 million to prevent and act against addictions related to psychoactive substances.

In 2020, 96.5 tons of cannabis were seized by customs and law enforcement, and more than 26,000 drug trafficking convictions were issued.

With more than 70,000 violations identified since its implementation, AFD is a success that adds to the deployment of the 103 operational intelligence cells on narcotics (CROSS) (5) across the territory.

“We have stepped up our partnership work with Snapchat so that investigative services can keep certain data longer before it is erased.”      Gérald Darmanin, Minister of Interior

(*) FDFE: Foundation for a Drug-Free Europe, established in 2004, is working with a hundred of groups of volunteers across Europe to inform and preventively educate youth and public via the materials of the campaign The Truth About Drugs, on the harmful effects of drug use. (www.fdfe.eu)

(3) ANSM: National Agency for the Safety of Medicinal and Health Products