Bringing the Truth about Drugs across Belgium 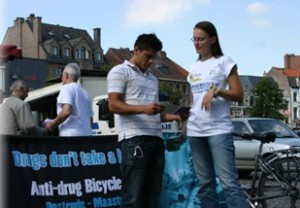 The bikers stopped in each of the cities and towns, holding meetings and distributing their materials to pass on the message to the authorities and the citizens, of the importance of developing primary drug prevention. The Tour is in alignment with the United Nations Office on Drugs and Crime (UNODC)’s three-year campaign to curtail the progression of drug abuse and salvage lives across the world. It follows the FDFE’s 2007 Anti-Drug Marathon between the Hague and Brussels, made to focus the attention of the authorities and the public on the dangers of drugs.

The summer holidays, a time for leisure and festive activities, are a perfect opportunity to address these issues and to remind the public that drugs never take a holiday. Cannabis for example, one of the most problematic drugs in Europe, is often seen as a soft or recreational drug. But just like cocaine and heroine, its addictive effects no longer need to be proven.

The bikers were warmly welcomed in the different city and town halls along the way and received the attention of civil authorities such as the Mayor and Chief of Police on several occasions. FDFE found real concern about the proliferation of drugs, particularly with regard to young people. Many officials have decided to tackle the drug problem by starting in schools, before the youngest children can be influenced by drug pushers, inspired by our booklets « The Truth About Drugs, » which were presented to all officials during the meetings.

FDFE has experienced that a strong basic education on the dangers of drugs is the best way to tackle the problem. It has been shown that if a person can reach the age of 21 without using illicit drugs, he or she is unlikely to ever do so. To keep our children safe, FDFE believes that we must educate them from an early age, at schools and through groups and associations, on the truth about drugs and their risks.