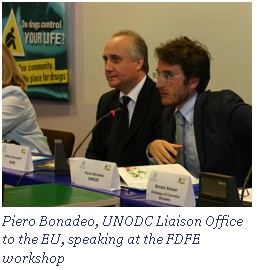 The 20th UN World Drug Day was observed in Brussels on Thursday 26 June, at a European workshop on drug prevention for international diplomats and anti-drug professionals by the FDFE, that included the launch of the UNODC’s 2008 World Drug Report, concurrent with the official release in New York.

Keynote speaker Piero Bonadeo, UNODC Liaison Officer to the EU, echoed UNODC Executive Director Antonio Maria Costa’s words as he spoke about working with security forces to quash supply of illicit substances, while fighting shoulder-to-shoulder with civil society in the battle to reduce demand through primary prevention. Full data on the report can be found at unodc.org.

“The concentration on prevention and treatment in drug-control strategy is bringing health to the forefront of the issue,” said Bonadeo in his address to the representatives of some 30 nations. “There is growing support for the fact that drug control is a responsibility shared by all of us.”

One topic for debate was the figures for drug addiction in the Middle East, highlighting the fact that while countries such as Afghanistan—with its €2.5 billion ($4bn/£2bn) opium trade—are major producers of drugs, rates of users and addicts in neighbouring countries are also rising to a record high.

International drug expert and former Hungarian national drug coordinator Katalin Szomor, opened the event by presenting the history of the UN Day, sharing her experiences from the first UN world conference to address drug demand reduction policies, held in Vienna in 1987. Ms. Szomor told the story of former Colombian Justice Minister Enrique Parejo Gonzales, who cheated death after being shot in the head three times by a cocaine gang, going on to lead that initial conference which gave rise to the first UN International Day Against Drugs on 26 June 1988.

Speaking at the workshop on Thursday was Minister Plenipotentiary of the Colombian Embassy, Renato Salazar, who presented Colombia’s ‘Shared Responsibility’ initiative, which aims to raise awareness of the ramifications of the country’s illegal drug trade, pointing out the ‘ecocide’ committed as drug manufacture and trafficking damages not only the lives of users but also the environment.

While Afghanistan and Colombia deal with reducing supply by cutting down on cultivation and production of illicit substances—the theme of this year’s UN Day—it remains that focusing only on this element of the problem has not produced desirable results. Testament to that are last year’s record period of opium cultivation in Afghanistan and the 27% surface increase of coca cultivation in Colombia between 2006 and 2007.

Presenting the only stably successful alternative cultivation programme in the world was Thai native and Buddhist monk Phra Sudhiñanavides. As he showed, The Royal Project eliminated illicit cultivation in Thailand over a period of several decades, spearheaded by the King’s own initiative and on-the-ground research and consultation, indicating that something can be done to reduce cultivation without harming the livelihood of farm workers.

Speaking on behalf of FDFE, Dr. Christian Mirre presented the work of his organisation and the importance of primary prevention in tackling the global drug problem.

“Drugs are a plague in the world today,” said Dr. Mirre, former Fellow of the CNRS (the French National Centre for Scientific Research). “They fuel sexual abuse, violent crime, perpetuate war and—perhaps most importantly—destroy individual lives. It’s a problem we all face whether directly or indirectly, and if we all work in the same direction, we can do something about it.”

FDFE also unveiled a series of anti-drug video ads produced last year as part of an international prevention campaign supported by FDFE and its sister organisation Foundation for a Drug-Free World. The four films have the theme “they lied,” referring to peer-pressure on young people to try drugs. In one straightforward film aimed at both parents and young people, a boy dies after one hit of a drug. “They said one hit wouldn’t hurt,” says the boy. As his face is covered by doctors, his mother appears on screen. “…They lied,” she says. “Get your kids the truth about drugs.”

Participants at the workshop included international drug prevention professionals, diplomats from Western and Middle-Eastern countries, anti-drug NGOs, religious groups and municipal administrators. The interactive workshop offered a chance for officials and group leaders to exchange experiences with drug prevention initiatives across Europe and how they can effectively contribute to creating a drug-free society.

Tying in national, European and international issues, the workshop also featured Filip De Sager, drug policy coordinator from the Belgian city of Ghent, and Ugo Ferrando, President of Narconon South Europe. Mr. Ferrando presented a short video describing the recent establishment of residential centres for drug rehabilitation in Iran and Pakistan, and the many challenges his organisation has overcome to get them running and to begin taking care of the millions of drug addicts in those areas. “We are winning,” Ferrando said, “little by little—but we are winning.”