“This global challenge is interconnected with corruption, terrorism and illicit flows of money,” Mr. Ban told UN official and delegates at a meeting ahead of a UN General Assembly special session (UNGASS) on the world drug problem in April.

“Those who traffic in illegal drugs may also be involved in human trafficking, kidnapping, firearms smuggling, murder and numerous other crimes. 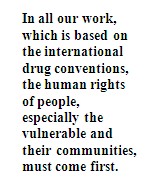 But the world drug problem is also a health problem, linked to overdoses, the ravages of addiction and the spread of HIV and hepatitis,” he added.

The UN chief insisted that implementing theSustainable Development Goals (SDGs), which were adopted last year by UN Member States to wipe out poverty and fight inequality over the next 15 years, will require “collective partnership and solid commitment.”

“UNGASS 2016 provides an opportunity for the international community to enter into an informed and wide-ranging discussion on drug policy in all its aspects,” Mr. Ban explained. “It can help in the development of objectives, based on human rights and concern for the health and welfare of people, that will support the implementation of the 2030 Agenda for Sustainable Development.”

He underlined that the Special Session can also reaffirm the central principle that no country can confront these issues alone. “Shared responsibility can ensure the delivery of balanced and comprehensive drug policies with a renewed focus on human rights and public health, including prevention, treatment and care,” he added.

But the UN chief said the world can also go further, looking at different options such as alternatives to prison or punishment for appropriate minor offences; greater access to controlled medicines for the relief of pain and suffering; and promoting alternative livelihoods for vulnerable farmers and their families.

“In all our work, which is based on the international drug conventions, the human rights of people, especially the vulnerable and their communities, must come first,” Mr. Ban concluded, noting that the UN Office on Drugs and Crime (UNODC) is uniquely placed to assist this process through its work on both the supply and demand sides of this issue.