France 2016: An overview of the drug prevention activities

The drug? We can definitely do something about it! 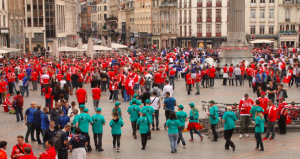 This year, Say No To Drug France did a huge mailing to the French Members of Parliament asking that drug prevention information was done in the schools to raise the awareness of the youth on the drug dangers. This resulted in MPs sending written questions to the Minister of Education on the subject.

Over the 2016 year the SNTD associations covering France distributed about half a million booklets The Truth About Drugs!

In Paris, the French team was present distributing their booklets during the soccer matches and concerts held in Stade de France and Parc des Princes and also during the Summer Festivals such as Rock on Seine, Solidays and at the Fête de l’Huma.

Of course they did a huge distribution of 300.000 booklets in 2 months, in the cities participating to the European Championship Soccer of the UEFA 2016.

The team was congratulated by the policemen who told that most of their interventions are related with a drug problem.

A man smoking cannabis thanked the team for the action and said that it was very important to inform the children.

Partnerships were established with India, Morocco, French Polynesie, Haïti and recently with Congo RDC associations and materials were sent to them to inform their people.

Parents, teachers, police, medical doctors, humanitarian associations and even institutions, dealing with people and aware of the harmful effects of drugs were asking for more booklets to distribute or to have more information. 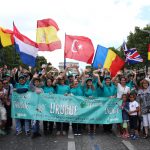 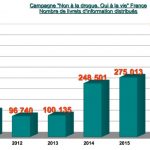