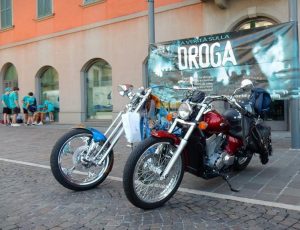 On July 15, following the International Day Against Drug Abuse and Illicit Trafficking and to raise the awareness of the youth and the public at large on the dangers of drugs, the volunteers of the Italian association Dico No alla Droga of Bergamo organized a motorcycle rally (1° Motoraduno Nazionale Dico No Alla Droga) around the beautiful and largest Iseo Lake taking its name from the city Iseo which is an enchanting historic town of medieval imprint known internationally.

This Tour initiated by the anti-drug I/C of Bergamo Oreste and with Monica was held under the patronage from the municipalities of Sarnico, Lovere, Sulzano and Iseo. The Bergamo volunteers received the help of the other associations from Milano, Modena, Monza, Brescia, Como, Valenza and Novara. Some motorbike celebrities participated such as Paolo Caprioni from the Paris-Dakar and Africa Eco Race and also Stefano Bascialla.

All kind of famous moto brands in great colors were present, the 100 motobikers wearing the typical green tee-shirt of the logo Foundation.

The tour started from Sarnico, a charming tourist resort on the lake, passed through Lovere, another touristic destination, went through Pisogne, Marone, Sulzano an internationally famous village for Christo and Jeanne-Claude‘s 3 Kms long work of art « The Floating Piers ». Then it continued to Iseo and the arrival was in Clusane di Iseo that offered views of rare beauty.

In each of these places were placed an infopoint for the distribution of booklets The Truth About Drugs for prevention. In Total were distributed 4800 booklets. 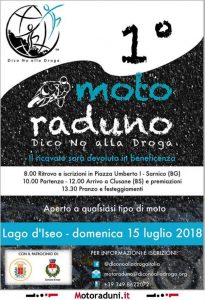 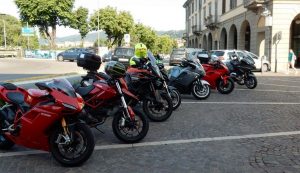 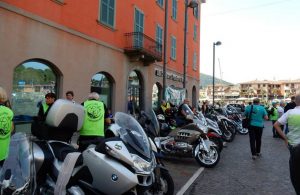 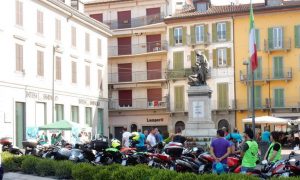 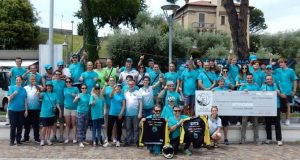 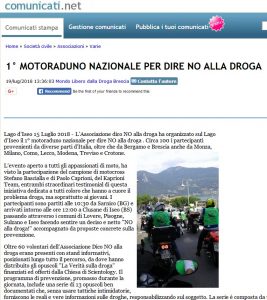 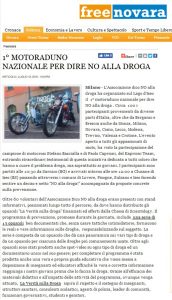 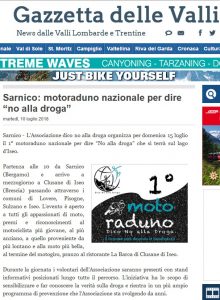