The FDFE Representative attended the 2nd Asia Pacific Forum Against Drugs, held in Singapore on 6 October 2017 and gathering about 200 delegates of like-minded organizations. Here after a Summary.

« Together, A Drug-Free World for our Children”

The National Council Against Drug Abuse (NCADA) of Singapore organised the 2nd Asia-Pacific Forum Against Drugs (APFAD). The event brought together local and foreign delegates from government agencies, non-government organisations (NGOs) and civil society groups, to network and discuss how to better counter the continuing global calls for drug liberalization and the lobbying of pro-drug groups.

2. In the two years since the inaugural APFAD in 2015, the calls for drug decriminalization
and legalization have grown louder. Pro-decriminalization and legalization groups continue to
push their agenda. Against this backdrop, APFAD aims to rally like-minded people and
organisations in the Asia-Pacific region and beyond, and reiterate our firm position that drugs have no place in our societies and communities.

3. Experts from beyond the region were invited to share their expertise on combating the
drug problem. They included Mr Jón Sigfússon, Director of the Icelandic Centre of Social
Research and Analysis (ICSRA), and Dr Kevin Sabet, Director of the Drug Policy Institute in
Florida, USA. Mr Sigfússon elaborated on Iceland’s successful mobilization of its community
to address its youth drug abuse problem. Dr Sabet, who spoke about cannabis legalization in
the USA at APFAD 2015, gave an update on the situation in Colorado and other American
states that have legalized or decriminalized cannabis, and the negative consequences of such
action.

4. In his speech, Guest-of-Honour, Mr K Shanmugam, Minister for Home Affairs and
Minister for Law, underscored the importance of a whole-of-society effort against drugs. He
also stressed the need for the community to work together to build a drug-free world for our
children.

5. Mr Hawazi Daipi, Chairman of NCADA, rallied delegates to adopt the APFAD
Declaration as a statement of common purpose to secure a drug-free world for our children.

1. We envision a drug-free world for our children, and uphold Article 33 of the United Nations (UN) Convention on the Rights of the Child to protect our children from drug abuse:
“States Parties shall take all appropriate measures, including legislative, administrative, social and educational measures, to protect children from the illicit use of narcotic drugs and psychotropic substances as defined in the relevant international treaties, and to prevent the use of children in the illicit production and trafficking of such substances.”

2. Drug abuse is a global problem that harms millions of people, and destabilizes families, which are the cornerstones of strong communities and nations. All peoples have the right to expect their governments and civil society to work together for a drug-free society. Our children have the right to grow up and develop in stable families, where they can achieve their potential, free from drugs.

3. We oppose the legalization of drugs because such policies send the wrong message to our children that drugs are not harmful and addictive, which will inevitably lead to an increase in drug demand and abuse. There is an urgent need to counter the well-funded pro-drug lobby which aims to decriminalize drug abuse and legalize drugs.

4. Drug abuse should be addressed in a comprehensive and holistic manner, involving both drug demand and supply reduction measures. These measures should include preventive education, rehabilitation, evidence-based research and enforcement efforts. Drug rehabilitation programmes should have the goal of helping drug abusers kick the habit. We must be firm with repeat abusers to strongly discourage relapse and prevent contamination of others.

5. All persons have the responsibility to speak up and make a stand for a drug-free world for our children. Such a vision is neither utopian nor impossible. We call on all governments, non-government organisations (NGOs) and civil society groups to come together to combat drug trafficking and drug abuse, for the sake of our children, our families, and our communities around the world. 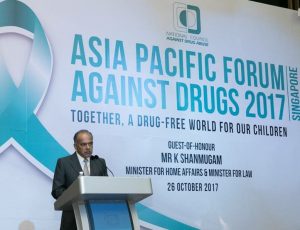 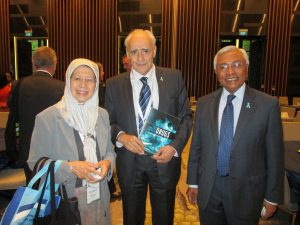 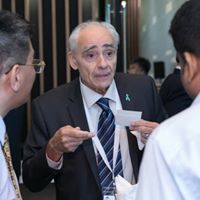 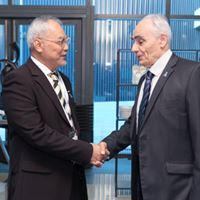 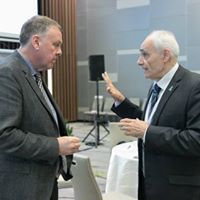 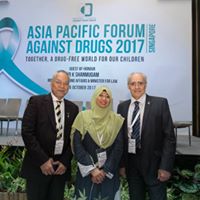 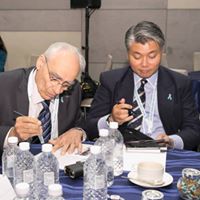 Group photo of the Forum 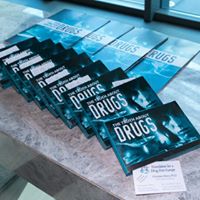