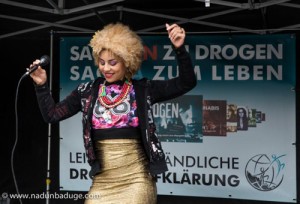 In honor of the International Day Against Drug Abuse on 26 June 2015, the association Sag-Nein-Zu-Drogen conducted a one-week-long drug prevention tour through Germany, accompanied by a BMX World Champion and an internationally renowned singer.

We visited 6 different cities in seven days:  Munich, Nuremberg, Chemnitz, Leipzig, Cottbus and Berlin. The tour route was chosen to hit target areas of Germany affected by the trend drug Crystal Meth, one of the most devastating drugs on the market. Crystal Meth has been flooding over the Czech borders into Germany for several years now and since 2009 the number of first time users has increased by more than 700 %. The average age of first time use in this area is as young as 16 years of age. Therefore, drug education of young people is particularly important.

We hit the road with a team of 12 dedicated anti-drug fighters. In each city we had an info stand and open air concert with US american singer Joy Villa and other young and upcoming artists. Our volunteers had informative talks with those who came to the info stands and in total more than 11,500 “Truth About Drugs” booklets were distributed.

We additionally cooperated with the Czech BMX World Champion who has been engaged in drug prevention since 2013. With our help, he was able to conduct anti-drug lectures in German schools and talked to more than 500 students about the short and long-term effects of drugs and how it is to lead a drug-free lifestyle.

Both teachers and students were very impressed by this young BMX stars lectures..

“I am happy”, was the simple statement of a teacher after the 1.5 hour lecture and BMX show of the young champion. A student said: “I thought the lecture was very informative and instructive, because he [BMX lecturer] also said that he has several friends who are taking drugs and he is now the BMX World Champion while his other friends didn’t accomplish anything and are using drugs. I thought it was overall a very good lecture!”

Surveys before and after the lectures revealed that the percentage of students who think drugs are harmful rose by 20% – a fact that shows that education plays an important role in demand reduction. And it can be a lot of fun, too!