NOTE on the impact on regional security in Central Asia of the non-reducing volume of drugs production in Afghanistan and the flow of Afghan drugs via so-called “Northern Route”.

According to the European Monitoring Centre for Drugs and Drug Addiction only in Uzbekistan from 1993 to 2015 seized illicit trafficking of more than 70 tons of Afghan origin drugs.

I also said that last year Uzbekistan has continued its efforts in reduction in demand and supply of drugs in accordance with the counter-drug strategy defined by the Program of comprehensive measures to counter drug abuse and illicit trafficking for 2016-2020.

These figures show the scale of the supply of Afghan drugs to Europe through Central Asian countries and once again confirm the relevance for European countries to combat the problem of drugs.

In this regard, it is especially important to equip customs check points of Uzbekistan and other Central Asian countries with large scanning devices for cargo and vehicles, including within the EU development assistance.

Enhancing the borders management and the fight against the drug trafficking is equally meet the interests of Central Asian countries and the EU. European investment in the strengthening of border security and the establishment of effective barriers in the way of continuing flow of Afghan drugs – it is an investment in the safety and security of the European countries themselves. It is better to tackle this common threat on the outskirts, rather than facing its negative effects on the EU Member States’ territory. 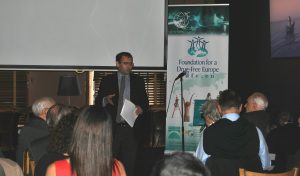