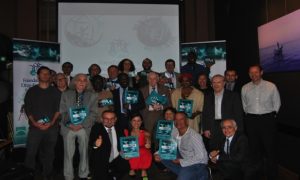 Given the scale of the drug problem at European and International level, there is an urgent need for the States to work together to stem the phenomenon of trafficking human beings, terrorism and arms trafficking. A possible solution is to intervene upstream of the problem with a prevention at the right order of magnitude.

On 6 June, in the frame of the United Nations International Day Against Drug Abuse and Illicit Trafficking, was held the 4th European Meeting: Drugs and Prevention in presence of 7 representatives of embassies, numerous directors of associations and individual members who attended the event organized by The Foundation for a Drug Free Europe (FDFE), in partnership with the Foundation for a Drug Free World (FDFW) and Say No to the Drug Belgium, held their. The event took place in the library of the Cercle des Voyageurs in Brussels.

In the introduction was exposed the growing problem of drugs on a global scale and more particularly in Europe according to the data from the 2016 Report of the UNODC * and the EMCDDA *.

A lecturer, biochemist trained, after defining what is a drug has explained in simple terms the phenomenon of addiction and drew attention, with supporting illustrations, on the false data too often disseminated in the public. He stressed the importance of undertaking a sustainable preventive education based on facts and also how to talk to young people about drugs, which was very appreciated by the attendees.

The following speaker demonstrated the interference of drugs with the molecular mechanisms of the brain’s reward chain. Succeeding were the presentations of the prevention and information activities done at grass roots level by the volunteers of the Say No to Drugs associations of Belgium, France, Greece, Italy, Czech Republic and Switzerland, enamelled of comments from parents, teachers, policemen and even firefighters on the real need to educate young people about the of drug dangers, including alcohol.

The FDFE, founded in 2004, is a non-profit organization based in Sweden. She is a member of the Civil Society Forum on Drugs of the European Commission, the World Federation Against Drugs (Sweden), and Vienna NGO Committee on Narcotic Drugs (Austria). The FDFE with a hundred of associations is present in 20 European countries.