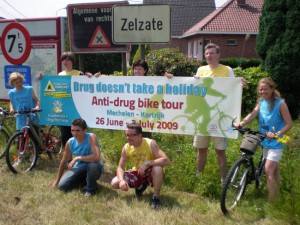 Ateam of bikers from the Foundation for a Drug Free Europe (FDFE) started from Mechelen on 26 June, to celebrate United Nations International Day against Drug Abuse and Illicit Trafficking and covered 230 Kms in Flanders. Going through the cities of Antwerpen, Zelzate, Gent, Eeklo, Nieuwpoort, Ieper to end one week later in Kortrijk. The bikers along their road met different city terminals such as Mayor, Alderman, Police official or Drug prevention in charge, who appreciated the effort made by the bikers who were warmly welcome by the population and the youth. The purpose of the Tour was to share the experiences with the city officials, to support existing drug prevention initiatives and to raise the awareness of the population on the drug dangers.

“To tell the youth and people there are soft drugs or recreational drugs is a criminal lie” says Christian Mirre, from FDFE and former fellow of the CNRS, the French National Centre for Scientific Research. “Its time to face the reality and stop these young desperate people dying by overdoses, to have the family destroyed, and to see the creeping criminality gaining the social fabric.”

In releasing the World Drug Report 2009 in Washington D.C. on June 24, the Executive director of the United Nations Office on Drugs and Crime, Antonio Maria Costa, underlined the need for more drug prevention. The World Report 2009 shows encouraging signs of improvement, with the $50 billion global cocaine market shrinking.

From its side the FDFE is putting the stress on the importance of developing a strong primary prevention campaign to educate and protect the youth and was promoting its educative tools:

The Truth About Drugs booklets – giving facts on the ten most used drugs. These booklets are broadly delivered to youth, parents, teachers and general public to fill the vacuum of misinformation and insufficient awareness of the health risks involved with drug usage. More than 21 million copies of the booklets have been distributed worldwide.

The Truth About Drugs Public Service Announcements, 16 video-clips, available on DVD, showing the impinging reality of what drugs are and the results of their usage.

The Tour was organized by the FDFE in partnership with the United Nations Office for Drugs and Crime (UNODC – Vienna), with the support of Chamizo Fietsen (Sint-Katelijne-Waver) and Palm3.Nutrition (Adegem).

The Foundation for a Drug-Free Europe (FDFE) established in 2004, and based in Brussels, is a NGO partner of the United Nations Office on Drugs and Crime (UNODC) and is also a member of the Civil Society Forum on Drugs of the European Commission.