FDFE at the first World Forum Against Drugs 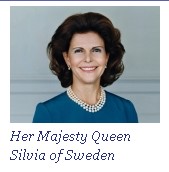 FDFE participated to the World Forum Against Drugs held in the City Conference Centre of Stockholm last 8-10 September. With more than 500 participants coming from 82 countries, this has been probably the largest non governmental forum on Drugs ever. More than 40% of the countries of the world were represented, including Sweden, Norway, Belgium, USA, France, Canada, England, Australia, India, Brazil, Russia, Nepal, Belarus, Uganda, Vietnam, Thailand, Pakistan, Bangladesh, to name but a few.

This Forum was a unique opportunity to talk, discuss and present effective actions to undertake to build up a safer and drug-free world. Speakers were all of high-level with health ministers, scholars, scientists, international drug policy makers, and representatives of Non Governmental Organizations from around the world.

The Forum was started with an address made by H.M. Queen Silvia of Sweden. The Queen put the stress on the current globalization of the drug problem and the role parents play in the education of teenagers to protect our youth against drugs.

FDFE led the workshop “Effective drug prevention programs – order of magnitude”, introducing its work and that of its sister 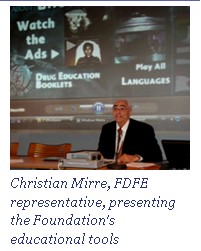 organization, the Foundation for a Drug-Free World, in the field of drug prevention. « The Truth About Drugs » booklets were presented at the workshop and were greatly valued as an effective tool of education for the youth. Part of the workshop was also the showing of some of the new Public Service Announcements recently released, which were in great demand from educators and NGOs representatives attending the workshop who wanted to use them in their lectures on the dangers of drugs.

As a conclusion, the 24 points « Declaration of World Forum Against Drugs » was proposed, supporting the works of the UN Convention on the Rights of the Child (article 1); the UN Office on Drugs and Crime (UNODC), the Commission on Narcotic Drugs (CND) and the International Narcotics Control Board (INCB) in its article 6; opposing all forms of legalization of illicit/psychotropic drugs (article 14) and asking in article 24 that: “The developed countries must reduce the demand for drugs and assist the developing countries in the fight against drug abuse and drug trafficking”.