On 9 June in Paris was held the 2nd edition of the Adidas 10 km Paris. They were some 22000 runners registered and among them the SNTD France team wearing their remarkable topaze tee-shirts. The originality of this run is the distance which is accessible to a greater number and the fact that you run as a team to represent your district in Paris (14 districts were represented). 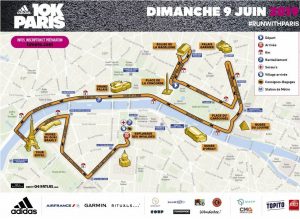 The first race started at 9am on Sunday morning Place de la Concorde to end up at the Invalides. The SNTD team did it. Of course they have not reached the time of the great winners Florian in 29 minutes for the men or of Garance in 30 minutes for the women, but as said the four-time gold medalist Jesse Owens in the 1936 Olympic Games:

« The only victory that counts is the one over yourself »

The SNTD France team at the arrival

Congratulations to the all the runners!