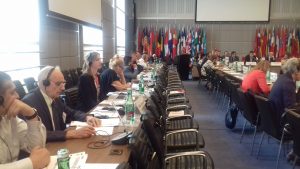 The FDFE representatives from Brussels and Vienna attended the 2017 OSCE-wide Conference on Combating the Threats of Illicit Drugs and the Diversion of Chemical Precursors held in the “Neuer Saal” of the Hofburg, former Imperial palace, in Vienna (Austria).

About 54 States Delegations, Partners for Co-operation, and 28 International Organizations, Academic and Business Circles and Non-Governmental Organizations were participating together with Members of the OSCE Secretariat and OSCE Institutions to the 3 sessions, with the following themes:

2. Illicit Drugs as a Source of Financing Illicit Activities; 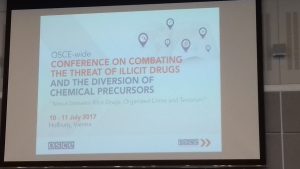 FDFE intervened in the third Session. The representative did a statement reminding the 3 U.N. Conventions, the demand from the civil society for more information on drugs and that prevention does work. In the Recommendations to the States was requested to raise the awareness and educate the youth on the harmful effects of drugs, to reconsider the low ratio of the budget allocated to prevention vs. treatment and repression, and was also demanded the right to co-operate with the States to create a better society for our children.

(*)Organization for Security and Co-operation in Europe – Vienna – Austria