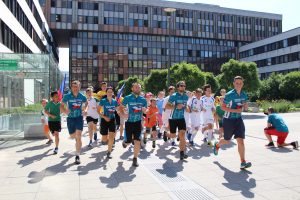 The association Say No to Drugs – Say Yes to Life Czech Republic organized a 10 days long biggest anti-drug campaign Cyclo-run for a drug free Czech republic 2017 which is associated with sport promoting a life without drugs and get a high level of attention from the media. This 15th campaign , held from 12 June to 23 June 2017, was aimed to highlight the LONG-STANDING NEGLECT OF DRUG EDUCATION in Czech Republic, especially regarding the highest risk group – elementary and secondary school students, between 10-15 years of age.

– According to the latest European School Survey Project on Alcohol and Other Drugs (ESPAD 2015), 37 % of Czech youth, in the age between 15-16, have smoken cannabis drugs (mostly
marihuana). That brings the Czech Republic to a very sad first place in the whole Europe!
– It is estimated that in the Czech Republic there are 300,000 teenagers between the age of 15 and 19 who already had an experience with an illegal drug. Since there is around 622,000
adolescents nationwide in total, nearly every second of them has had an experience with an illegal substance!

– The age limit of a first-time drug user has gone down to the age of 10 years old!

Along the route the Cyclo-run team visited 38 Czech and Moravia towns. The Cyclo-run team most often visited the Mayors and D/Mayors. In eight regional capitals they met also the D/Mayors for Education, Social and Health policy. Meetings were also often attended by the heads of the local Municipal Police forces or local managers of Municipal Security.

Lecturers delivered at schools to children FREE anti-drug lectures, in the streets were organized information campaigns with distribution of our anti-drug materials The Truth About Drugs.

This event was daily published in the mainstream media (newspapers, TVs, radios and websites) and reached over 3.000.000 Czech citizens in 10 working days. Directly by anti-drug activities (lectures, booklets, events) were reached 120.000 citizens!

Number of articles gotten about the Cyclorun: 33 printed, 60 on Internet
Number of TV reporting about Cyclorun: 7