FDFE Side Event at UNODC

On 19 March 2019 the Foundation for a Drug Free Europe (FDFE) co-sponsored a side-event at the UNODC with Fundacion VIDA and Fundacion Mejora, both from Madrid and with the “Verein zur Förderung der Völkerverständigung” (VFV) from Vienna, during the 62nd Session of the Commission on Narcotic Drugs (14-22 March 2019). This CND Session was gathering more than 2000 participants from governments, NGOs with U.N. ECOSOC status and associations from civil society from around the world.

The Ministerial Segment of 14-15 March was opened by the United Nations Office on Drugs and Crime (UNODC) Executive Director, Yury Fedotov. He highlighted the importance of « comprehensive approaches to the difficult and complex problems posed by drugs, responses that put people first and seek to safeguard their health, well-being and future ».

This was followed by video messages from the President of the UN General Assembly, Mrs. Espinoza Garces, who reminded about the 17 goals of the 2030 Sustainable Development Agenda (SDGs) and by the UN Secretary-General Antonio Guterres stressing on reducing the drug supply and protecting the health. The President of Bolivia, Evo Morales, the Prime Minister of Mauritius and some 30 Ministers of Foreign Affairs, Interior, Justice and Health intervened during these two days. 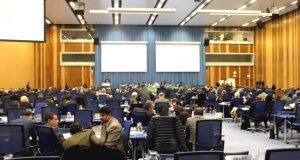 The topics of the following regular sessions of the CND (18-22 March) were chaired by H.E. Ambassador Mirghani Abbaker Altayeb Bakhet of Sudan (Group of African States) newly elected in December 2018.

Meanwhile, a hundred of side-events were held in the UNODC premises during this week.

Drugs: Better to Prevent than to Cure to Protect the Children.

– the words of the UNODC Executive Director on 26 June 2018 about the importance of prevention for the children and young people and of the President of the INCB about the obligation of the States Parties to comply with the 3 International drug control conventions,

– the harmful effects of cannabis reported by different countries as well as the controversy about harm reduction as a solution, and

– the compliance of the States with the article 33 of the Convention on the Rights of the Child.

The first speaker was Natalya Ocheretiana, D/Chief of the Public Relations Department of the Ukrainian Patrol Police of the Dnieper Region – Ukraine. In her presentation: 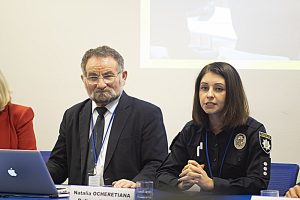 she insisted on the lack of informative data on the dangers of drug use for the children and particularly regarding the cannabis falsely presented as a « light drug » making these youth easy targets for the dealers. So, Ukraine has developed a School Police Officer program involving 15 trained police officers to deliver the lecture The Truth About Drugs in 150 schools (60 000 children) to enlighten them on the drug harmful effects and protect them from subsequent offenses and crimes. And through this program they already got encouraging positive results with the youth.

The second speaker, Hans Clippeleyr, District Police Inspector from Belgium is also for 20 years a passionate lecturer on drug education prevention. In his presentation: 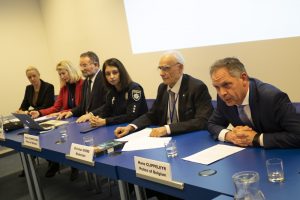 he described the importance of a primary prevention education of the children to be done in primary schools. In an interactive dialogue he explains what are the drugs and their harmful effects, the related health, psychological, financial and legal problems, how to resist the peer pressure and get the ability to say no. In addition he involves the parents to back up the lessons by giving good examples at home. Finally he uses a former addict who gives his own experience with drug use and their destructive effects.

The third speaker, Robert Galibert from France, is a trained biochemist with 37 years of hospital experiences. He is for 26 years a trained lecturer on drug danger education with the purpose of bringing the factual and true data on the cannabis drug which opens the door to the other ones. His presentation: 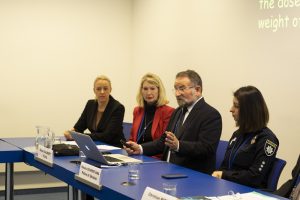 Cannabis light, medical, CBD,… what is all about?

based on scientific evidences, shed the light on many physiological effects hidden to the public and future consumers due to firms or groups vested interests. He disclosed the current « propaganda effect » made to trivialize cannabis, make it « attractive », to give it its « letters of nobility » both as a « medicine » and as a product of « high quality » and of « great nutritional value ».

The presentations of the three speakers, illustrated by slides, were highly appreciated by the attendees including Representatives from governments.

To conclude the Moderator did a short presentation of available education prevention materials in 23 languages from the campaign The Truth About Drugs (14 booklets, a Documentary DVD and a Curriculum package). He stressed that as adults, whoever we are or do, we share the responsibility of the protection of the future of the children against the drugs, referring to the 3Ps rule:

Prepare – for future risks in the health field.

With the UNODC Executive Director