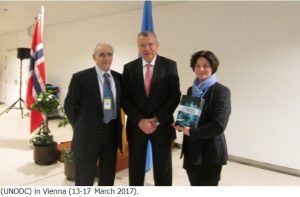 The participants joined the commitment of 60th CND Session: the diamond session, to keep protecting people from harmful effects of drugs.

The Foundation for a Drug Free Europe (FDFE), attended the 60th Session of the Commission on Narcotic Drugs (CND) at the United Nations Office on Drugs and Crime

More than 1500 representatives of Member States,  international organizations, associations and members of the Civil Society were present at the CND and attending  hundred of side events. Amongst the participants were many of the National Committees on Drugs and other related government agencies from countries such as Austria, Belgium, Bolivia, Holland, Republic of Indonesia, Spain, United Arab Emirates, etc., and even representatives of the European Monitoring Centre for Drugs and Drug Addiction and from the European Commission Directorate General of Home Affairs.

The matters of discussion were the new orientations toward the 2019 CND session and the worldwide decisions taken to tackle the expanding drug problem.

The FDFE representatives Dr. Christian Mirre (Belgium) and Mrs. Birgit Karner (Vienna)  concerned by the lack of drug prevention and the education on the harmful effects of drugs established contacts with several other State officials and organizations interested in  preventively protecting their population.

There are more and more countries interested and focussing on prevention as a way for the final and most effective handling of the drug problem, and some of the countries that showed interest on drug prevention educational tools were amongst others the Republic of the Union of Myanmar, Burkina Faso and Ukraine.

Dr. Mirre, from the Foundation for a Drug Free Europe, stated that: “most of the parties are interested on prevention because of the high concern on the rapid increment of drug users in more and more countries and at an earlier age”.

The UNODC Executive Director, Mr. Yuri Fedotov, in a closing statement reminded to all the countries their responsibility to protect the health and welfare of their people:

« Together we have made a commitment under the international drug control conventions to the health and welfare of people and communities everywhere – an enduring promise to millions of children, women and men that we must uphold » .

FDFE runs a network of over 100 groups in 22 countries of the European region and has distributed its “Truth about Drugs” materials to over 20 million people in the different countries in the last few years.

Foundation for a Drug-Free Europe is a proud member of the Civil Society Forum on Drugs of the European Commission, the Vienna NGO Committee on Drugs and the World Forum against Drugs. It was formed in March 2004 with the firm purpose of preventing and stopping debilitating drug use through educating non-users concerning the harmful effects that drugs can inflict upon the body, mind and personality, and by finding and directing existing users to programmes that can help them achieve comfortable abstinence for life.