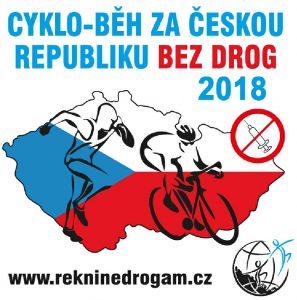 In the frame of the celebration of the United Nations International Day Against Drug Abuse and Illicit Trafficking, between the 11 and 22 June 2018, the 16th Czech Cyclo-Run 2018 campaign  set itself the goal to raise awareness about the long-neglected anti-drug education especially with regards to the most endangered group which are children from the second level of elementary school. These are the children between the ages of 10-15.

During our Cyclo-run for a drug free Czech Republic, through Bohemia and Moravia, we have organized 40 meetings with the Representatives of the following cities:

In most cases these representatives came from the ranks of mayors, deputy mayors, heads of education or social affairs departments. In many instances, municipal police officers and city prevention managers also participated in the meetings.

ANALYSIS OF THE SITUATION IN THE CITIES

In many instances, the representatives admitted that addressing the consequences of drug abuse is becoming more and more expensive and does not bring about the desired outcomes.

Many of them were only aware of the drug use on the streets but were unaware that many children attending the second level of elementary school already have a drug-related experience.

They also stated that the state-funded activities focusing on the consequences of drug use (replacement of syringes and needles, administration of drug substitutes etc.) cannot solve this issue alone. If anything is done, the situation is deteriorating and many municipal policemen and prevention officials attest the fact that solving this problem has become a never-ending fight without any real results.

During our meetings, we have observed a positive inclination towards zero tolerance policy.

Number of people who personally helped on Cyclo-run: 42

Number of schools where was delivered SNTD lectures: 75

Number of towns where was SNTD lectures: 58

Number of distributed booklets at schools: 31.226

Number of distributed booklets at street: 41.340

THE DRUG SITUATION IN THE CZECH REPUBLIC

According to the European School Survey Project on Alcohol and Other Drugs (ESPAD 2015),
37% of teenagers between the ages of 15 and 16 has had an experience with cannabis. This number exceeds the European average by 20% and puts Czech Republic in a sad first place among all European countries.

The age of first-time drug users has gone down to 10 years of age!

Graph: Experiences with cannabis drugs between Czech kids in the age 15-16 years
(ESPAD 2015, European school survey on abusing of drugs and alcohol) 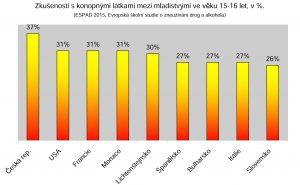 The last 16 years of our intensive campaigning against drug use confirmed that drug-related education is the only viable option for their eradication in our society.

During those years we have educated more than 100.000 children  in 500 elementary and 100 secondary schools in over 130 cities and towns in the Czech Republic. Our experience speaks clearly of the possibility of drug elimination through the reduction of the demand for drugs!

The demand for drugs is still high because the drug-related education if very low. Once we started implementing our effective anti-drug education program named THE TRUTH ABOUT DRUGS at the second level of elementary schools, we have seen results: 89% of attendees agree that drug-related education is important; 13% of attendees change their opinion on drugs.In reality, this means that 5% of children change their opinion completely and 8% finds out that drugs are more harmful than they originally thought. Thanks to our lectures, 13% of children are determined to refuse drugs in the future. (Survey conducted by SAY NO TO DRUGS – SAY YES TO LIFE organization and is based on 15.900 anonymous interviews with children following the TRUTH ABOUT DRUGS lecture which have taken place in various locations around the country.) This further illustrates the effectiveness and need for a good quality drug education.

SAY NO TO DRUGS – SAY YES TO LIFE Czech Republic is the largest non – governmental association focusing on drug-related education in the Czech Republic. During the last 16 years of activity, it has distributed over 1 million brochures and flyers informing about the health and social risks of drug use. Also carried out more than 5.700 anti-drug street rallies in over 150 towns and cities of Bohemia and Moravia. Our volunteers personally informed citizens about the dangers of drugs and answered their questions.

For the last 16 years SAY NO TO DRUGS – SAY YES TO LIFE has been organizing annual CYCLE-MARATHON FOR CZECH REPUBLIC WITHOUT DRUGS which is the largest anti-drug campaign promoting a drug-free life through sports. This project is increasingly followed by media and this year has reached over 3 million of people.  Directly by lectures, events, booklets and flyers were reached 120.000 Czech citizens.