The 3rd European Meeting Drug & Prevention, in the frame of the 2016 U.N. International Day Against Drug Abuse and Illict Trafficking, was organized by FDFE (*) and held in Brussels, on 22 June, in the Cercle des Voyageurs Library, supporting the 2016 U.N. Campaign Listen FIRST (**) 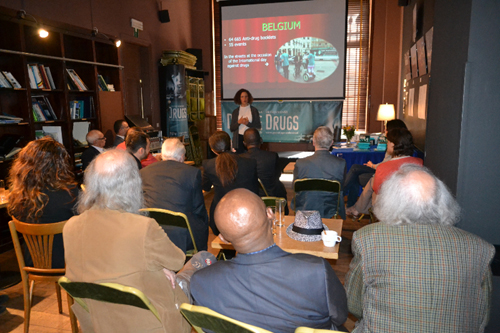 The speakers were coming from Belgium, France, Greece and Italy.

The attendees, mainly composed of diplomats, religious leaders and presidents of various organizations, were informed in a first presentation on: Drug, an International Issue. In this session, it was considered the increasing use of drugs, and how an international  propaganda is currently actively disinforming the public on the danger of cannabis use, opening wide the gate to drug addiction and further, the use of other drugs and to their heavy treatments.

The second part of the day was devoted to: Understand to Act. The main speaker, a biochemist explained what is a drug and its effect on the person. Similarly a representative of a French national association gave his experiences in the rehabilitation of alcoholic-addicts.

Finally, successful prevention actions done in different European countries were given as a solution to  the drug problem, and as was saying a speaker: “This is not by addressing the consequences that the problem will be solved. Only if the cause is properly addressed  the problem can be acted upon and the situation reverted. Regarding the youth, ignorance has a major role to play.” The stress was put on the importance of prevention and on the educative role of parents and educators in applying: Listen FIRST. Also, the officials and politics have to enforce the articles 3 and 33  of the Convention on the Rights of the Child.

FDFE is an association federating a hundred of associations through Europe with the purpose of preventing and stopping debilitating drug use through educating non-users. FDFE is  supporting the international campaign The Truth About Drugs and using its materials.

(**)UNODC 2016 Listen FIRST campaign: “Something we all know how to do, but perhaps spend too little time doing: Listening”  UNODC Executive Director  (http://www.unodc.org/listenfirst/)