Hot time on this 15 June in the Stade de France in Paris/St Denis, for the great Top 14 Rugby Grande Finale between Clermont-Ferrand and Toulouse Teams. 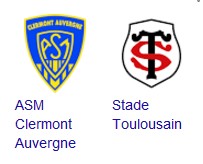 The winning team of the French Rugby XV Championship, the Top 14 is awarded with the famous Brennus’ shield created in 1892.

The Top 14 match was broadcast live in Clermont on a big screen on the main Place of Jaude , dominated by the equestrian statue of Vercingetorix. And the Say No To Drug Team (SNTD) of Clermont was there too with thousands of Clermont supporters!

So, on the Place of Jaude and around, some 1470 booklets The Truth About Drugs were distributed to the ASM* Clermont supporters and fans wearing their yellow tee-shirt, color of the Clermont Rugby Club. In addition, 760 booklets on Alcohol were distributed in the pubs and brasseries around, just to remind if needed about the virtue of temperance.