On 3-4 June 2019 in the famous palace Hofbug in Vienna (Austria) was held, under the Chairmanship of Slovakia, the 2019 OSCE-wide Conference on Combating the Threats of Illicit Drugs and the Diversion of Chemical Precursors. The topic was: Evolving Threat of Synthetic Drugs: from Addiction to Rehabilitation and Reintegration.

Some 113 Ministers, Ambassadors, Representatives of world Governments, the Holy See,* International Agencies such as UNODC*, INCB*, EUROPOL*, DEA*,OSCE, SELEC*, the European Union,* were attending including a few selected NGOs among which FDFE.

FDFE was invited to deliver a presentation about the importance of prevention to combat the drug problem. This was done by the FDFE Representative in Vienna (Austria) who intervened during the Session IV: Cross-cutting Issues.

The title of her presentation was: Youth Sustainable Protection by Drug Education Prevention 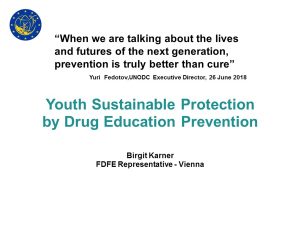 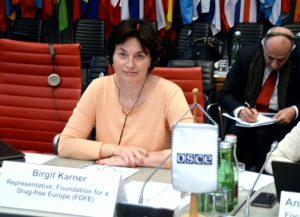 After a short presentation of FDFE, of its hundred organizations around Europe and of the Drug Free World were developed the following points:

2. The youth and the Drug Problem. It was reminded:

-the Convention on the Rights of the Child art.33,

3. The factors involved in the protection of the youth,

4. How We Help: a presentation of our educative materials and our groups in action across Europe,

5. Conclusions and Recommendations to the States and Policy Makers.

As a result, several country Representatives came to get more information from our FDFE Representative on our materials and drug prevention campaign.

OSCE: Organization for Security and Co-operation in Europe (headquarters in Austria);

UNODC: United Nations Office on Drugs and Crime, is mandated to assist Member States in their struggle against illicit drugs, crime and terrorism (headquarters in Austria);

INCB: International Narcotics Control Board for the implementation of the United Nations drug conventions (headquarters in Austria) ;

DEA: Federal Drug Enforcement Administration, part of the USA Department of Justice, is tasked with combating drug smuggling and distribution within the United States;

European Union: a political and economic union of 28 member states that are located in Europe. It has a population of about 513 million people. (headquarters in Brussels);