Drugs and the future

An article written by our colleague from Greece 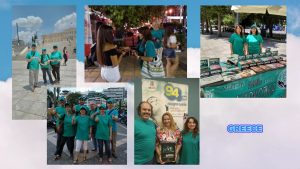 The United Nations have declared the 26th of June as the International Day Against Drug Abuse and Illicit Trafficking. Let us use this opportunity to reflect on an all so important obstacle that inhibits the well-being and possibly the very future survival of our societies: Drugs.

Drug use has been tormenting human societies since ancient times. The problem is intensified in our days.

One of the three major properties of drugs is that they are essentially Poisons.

Definition: [Poison]. 1. Natural or artificially created substance that after it is introduced into a living organism it exerts a harmful effect or even causes death: Dangerous / strong / deadly ~. The ~ of the snake / of the spider / of the mushroom. 2. Every substance that causes harm or injury to an organism: Tobacco / alcohol / heroin are ~ for the organism. (Triantafilides Dictionary)

Toxic to life constituents contained in Cannabis products such as marijuana, hashish etc., or in the products of Opium (Opium is taken from the variety of poppy under the scientific name of Papaver Somniferum) such as oxycodone, hydrocodone, codeine, fentanyl, heroin and morphine, or even the widely acceptable socially Alcohol – please note that the ancient Greeks considered it a shameful act to drink wine that was not diluted with water – are not at all new in the societies of Man. They possibly had some pharmaceutical use once as painkillers and analgesics, because, being poisons, they numb both body and mind. Since the 19th century but especially during the 20th century with the blooming of an international pharmaceutical industry and a modern medicine that systematically administers industrially manufactured medicines to the patient, along with the (created) ripe conditions for the acceptance and the more “liberated” spread of the so-called “recreational use” of street drugs, we experience as a society the wide-spread phenomenon of Drug Culture.

Drugs, in this context, are part of our lives. So it’s time for “the next step”, which of course will raise the profits of those who benefit: the legalization of drugs.

The simplistic equation “if it’s legal, it must be safe” is imprinted into the common mind and anyone could reflect on the consequences. The basic difference between “legal” and “illegal” is that the legal is taxed.

The International Foundation for a Drug Free World and the Citizens Initiative for a Drug Free Greece ensure that the public and particularly the youth, the parents, the teachers, the law enforcing and the justice enforcing agents, as well as every responsible and interested citizen has access to true and documented data about drugs with the references to the respective sources and scientific studies. We openly provide the truth to whoever is interested to have an education and an opinion on the subject. A constantly growing in numbers and quality network of volunteers distributes weekly thousands of pamphlets with THE TRUTH ABOUT DRUGS in Greece and Cyprus. The 13 widely recognized and popular pamphlets (one for every category of substances) are available freely through www.drugfreeworld.org for reading or ordering for free. Our field of activity is solely education and, thus, prevention.

The drugs pose a concern for us all, even if we are convinced that they will not invade our own home. They do enter our neighbor’s and fellow man’s home, who could then possibly destroy the life of a loved one of ours by driving under the influence of marijuana or alcohol. Or he could break into our own home or car under the pressing need for money for his next fix. You see, drugs do destroy body and mind but they also destroy one’s morality, turning man against man.

Our purpose is to encourage you to confront the problem by acquiring and giving your loved ones the chance to acquire true knowledge on what narcotic substances are and what their short-term and long-term consequences are on individuals and the society. Only that way will they be able to make rational decisions for the future. Knowledge is protection.

Some will benefit by a possible legalization.

Our children will not.

Sources/References:   they can be found in www.drugfreeworld.org listed by substance.

If you are interested in doing something effective about the drug problem in your area, please contact us.