Cyprus away from drugs !

As many parents Stella Esmeralda was aware of the world drug problem but she really realized the danger her teenager children and the youth were facing when she found out that the child of a friend, a teenager, died from drug abuse and that some other teens of the neighborhood were using drugs.

From there she took the responsibility to inform as broadly as possible the parents and the youth on the drug dangers. She was distributing prevention education booklets The Truth About Drugs, DVDs, doing lectures, using her artistic talents of music performer to spread a clear message about the drugs.

« I saw that a simple but factual information raise the awareness on the harmful effects of the drugs and protect the youths and adults from the insidious reach of the dealers ».

With her team Stella rallies more and more parents and officials eager to protect their beautiful island from the devastating effects of the drugs.

Welcome to the Cyprus team ! 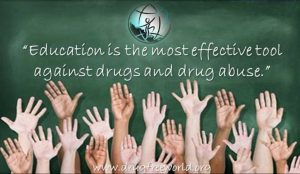