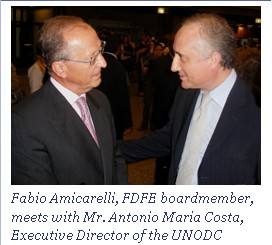 The Foundation for a Drug-Free Europe participated in the Beyond 2008 conference held in Vienna at the United Nations Office on Drugs and Crime (UNODC) on July 7 – 9.

Beyond 2008 is an international NGO initiative led by the Vienna NGO Committee on Narcotic Drugs, in partnership with UNODC, with the support of the European Commission among others. It represents an unprecedented and historic engagement of Non-Governmental Organizations (NGOs) like the Foundation, who work with those most affected by illicit drugs. The conference allows these NGOs to provide their advice and recommendations on the future of global drug policy to the member states of the United Nations.

The Beyond 2008 Forum represents the cumulative input of over 1,000 individual participants from more than 145 countries, representing millions of members and constituents from across the globe.

After three days of debate and discussion, the 300 delegates at the Beyond 2008 Forum concluded an historic and unique event by successfully achieving consensus on their contribution in the form of a Declaration and three Resolutions, which highlight what has been achieved by NGOs, identify opportunities on how governments and NGOs can work together in the future, and make specific policy recommendations.