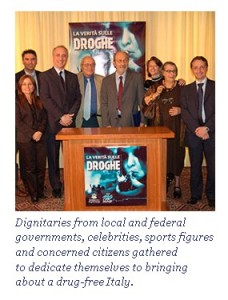 The Foundation for a Drug-Free Europe held an event to present the new anti-drug campaign for Italy. Dignitaries from local governments, sports figures, celebrities and concerned citizens joined the FDFE to dedicate themselves to bringing about a drug-free Italy.

The speakers described the extent of the drug problem in Europe and in Italy specifically, and briefed the audience on the importance of effective drug prevention programs.

In Europe, drugs constitute a multi-billion Euro business for organized 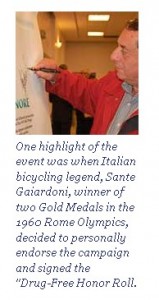 criminal networks. In the United States, the White House’s Office of Drug Control Policy estimates the total value of all of the drugs sold in that country at close to $64 billion a year. The cost to society in crime committed by addicts to support their habits and in rehabilitation costs, not to mention the human cost in ruined lives and families, is inestimable.

The Foundation has produced a series of booklets providing the truth about drugs in 20 languages, including Italian. The audience encouraged those in attendance to use the anti-drug materials not only by distributing them personally but also by getting corporate and government sponsors to adopt the campaign as their own.