WHAT IS A SYNTHETIC DRUG? 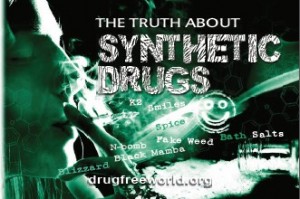 A number of synthetic drugs on the market, including Ecstasy, LSD and methamphetamine, are described in other booklets in The Truth About Drugs series. This booklet gives the facts about “synthetic marijuana” (Spice or K2), “synthetic stimulants” (Bath Salts) and a drug known as “N-bomb.” These are among the synthetic drugs known as “designer drugs.”

To understand what synthetic marijuana and Bath Salts are, and how they came to exist, you have to know what a “designer drug” is. A designer drug is a synthetic (chemically made) version of an illegal drug that was slightly altered to avoid having it classified as illegal. It is essentially an experiment by a chemist done to create a new drug that can be sold legally (on the Internet or in stores), allowing dealers to make money without breaking the law. As law enforcement catches up with new chemicals that are so created and makes them illegal, manufacturers devise altered versions to steer clear of the law. So the cycle repeats.

Some of these drugs are sold over the Internet or in certain stores (as “herbal smoking blends”), while others are disguised as products labeled “not for human consumption” (such as “herbal incense,” “plant food,” “bath salts” or “jewelry cleaner”) to mask their intended purpose and avoid health and safety rules.