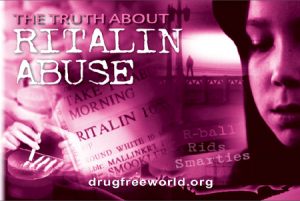 Ritalin is the common name for methylphenidate, classified by the Drug Enforcement Administration as a Schedule II narcotic—the same classification as cocaine, morphine and amphetamines.1 It is abused by teens for its stimulant effects.

Even when Ritalin is used as a prescription drug, it may have severe effects including nervousness, insomnia, anorexia, loss of appetite, pulse changes, heart problems and weight loss. The manufacturer says it is a drug of dependency.

In June 2005, the US Food and Drug Administration issued a series of public health advisories warning that Ritalin and drugs like it may cause visual hallucinations, suicidal thoughts and psychotic behavior, as well as aggression or violent behavior.