The truth about crystal meth booklet

WHAT IS CRYSTAL METH? 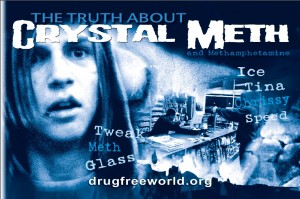 Methamphetamine is a white crystalline drug that people take by snorting it (inhaling through the nose), smoking it or injecting it with a needle. Some even take it orally, but all develop a strong desire to continue using it because the drug creates a false sense of happiness and well-being—a rush (strong feeling) of confidence, hyperactiveness and energy. One also experiences decreased appetite. These drug effects generally last from six to eight hours, but can last up to twenty-four hours.

The first experience might involve some pleasure, but from the start, methamphetamine begins to destroy the user’s life.

Methamphetamine is an illegal drug in the same class as cocaine and other powerful street drugs. It has many nicknames—meth, crank, chalk or speed being the most common. (See the list of street names.)

Crystal meth is used by individuals of all ages, but is most commonly used as a “club drug,” taken while partying in night clubs or at rave parties. Its most common street names are ice or glass.

It is a dangerous and potent chemical and, as with all drugs, a poison that first acts as a stimulant but then begins to systematically destroy the body. Thus it is associated with serious health conditions, including memory loss, aggression, psychotic behavior and potential heart and brain damage.

Highly addictive, meth burns up the body’s resources, creating a devastating dependence that can only be relieved by taking more of the drug.

Crystal meth’s effect is highly concentrated, and many users report getting hooked (addicted) from the first time they use it.

“I tried it once and BOOM! I was addicted,” said one meth addict who lost his family, friends, his profession as a musician and ended up homeless.

Consequently, it is one of the hardest drug addictions to treat and many die in its grip.

“I started using crystal meth when I was a senior in high school. Before my first semester of college was up, meth became such a big problem that I had to drop out. I looked like I had chicken pox, from hours of staring at myself in the mirror and picking at myself. I spent all my time either doing meth, or trying to get it.”