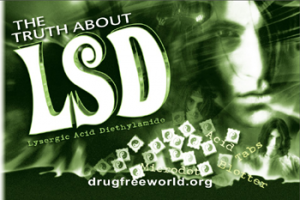 LSD is one of the most potent, mood-changing chemicals. It is manufactured from lysergic acid, which is found in the ergot fungus that grows on rye and other grains.

It is produced in crystal form in illegal laboratories, mainly in the United States. These crystals are converted to a liquid for distribution. It is odorless, colorless, and has a slightly bitter taste.

Known as “acid” and by many other names, LSD is sold on the street in small tablets (“microdots”), capsules or gelatin squares (“window panes”). It is sometimes added to absorbent paper, which is then divided into small squares decorated with designs or cartoon characters (“loony toons”). Occasionally it is sold in liquid form. But no matter what form it comes in, LSD leads the user to the same place—a serious disconnection from reality.

LSD users call an LSD experience a “trip,” typically lasting twelve hours or so. When things go wrong, which often happens, it is called a “bad trip,” another name for a living hell.